Start a Wiki
Pointdexters are third-generation Badniks. These robots resemble blowfish and have the abilities to match. Normally, they appear to be nothing more than a floating metal ball with dozens of holes in its body. When they are threatened, they will defend themselves by releasing sharp metal spikes from these holes, maiming anyone who gets too close.

The first time a Pointdexter was seen was in the Marble Garden Zone (replacing the Zone's usual "Bubbles" Badnik). Deducing that it had something to do with Doctor Robotnik, Sonic set upon his new foe. As Sonic approached, the Pointdexter puffed out its spikes, with Sonic barely able to summon his Insta-Shield in time. The forcefield wilts the Pointdexter's spikes and causes it to flee. One was later seen acting as a lieutenant for Robotnik, informing its master that his plans had, once again, failed. Other than these events, Pointdexters are used as aerial Badnik troops, acting as reinforcements in an emergency.

Pointdexters appear in Sonic the Hedgehog 3, originating from the Hydrocity Zone. 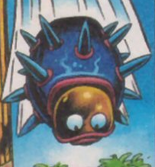 Art by Adamis
Add a photo to this gallery

Retrieved from "https://stc.fandom.com/wiki/Pointdexter?oldid=20202"
Community content is available under CC-BY-SA unless otherwise noted.