Start a Wiki
The Grey Emerald is one of the most important Chaos Emeralds after the Master Emerald. It is the balance between all the other Emeralds and has the ability to control external Chaos energy. The Emerald had apparently been lost for centuries, with the other six keeping the Floating Island afloat. Unbeknownst to Doctor Robotnik, it was actually in the possession of Knuckles the Echidna, who used it to extract Robotnik's new "God" powers and send him back down to Mobius.

Despite the Grey Emerald not having a counterpart belonging to Sonic the Hedgehog, the Grey Emerald still grew to the same size as the others when replaced in the Emerald Chamber and helped the Floating Island to become an impregnable fortress once more. However, Robotnik would return once more to absorb the Chaos Emeralds' power and become a God. This time, the doctor was successful but somehow managed to forget about the Grey Emerald's power and Knuckles was again able to extract Robotnik's power. Unfortunately for the tyrant, his body had become so used to the Chaos power that removing it caused him to shrink to the size of an atom.

Knuckles uses the Grey Emerald to take the Chaos Energy out of the Chaos Tap, but it grows to be the same size of the Master Emerald. 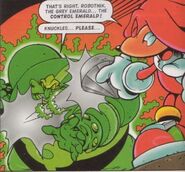 Add a photo to this gallery
Retrieved from "https://stc.fandom.com/wiki/Grey_Emerald?oldid=20324"
Community content is available under CC-BY-SA unless otherwise noted.