Start a Wiki
Caterkillers are one of Doctor Robotnik's most widely recognized models of Badnik. They were among the first generation of Badniks and still remain as active units in Robotnik's army today. These Badniks were taken directly from the Mega Drive game Sonic the Hedgehog and first appeared in Issue 1 of Sonic the Comic.

The early versions of Caterkiller were slow and stupid, but very mean and proved to be quite dangerous in enclosed areas. They attacked by biting prey and could only be attacked at the head since their segmented bodies were covered with spikes. As time went on, the Caterkillers evolved somewhat. They are now faster, more aggressive and can burrow through the ground.

Recently, in Sonic the Comic Online, several Ubernik versions of Caterkiller have appeared as part of Robotnik's invasion force. Regular ones gradually began to be reintroduced, with models responsible for guarding the Rail Canyon Zone and Desolate Dust Zone. Another aided in the assault on the Maple Flower Zone refugees. This particular one came to its end when Tails destroyed it with his tails and fists. Holly Thumpfoot then spent the rest of the adventure wearing its head as a hat. 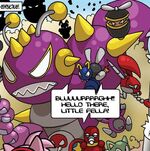 Art by Adamis and Fast Ashadonic

Art by Pete Murphy
Add a photo to this gallery

Retrieved from "https://stc.fandom.com/wiki/Caterkiller?oldid=20157"
Community content is available under CC-BY-SA unless otherwise noted.