Start a Wiki
Buzz Bombers are flying wasp-like robots that were among Dr. Robotnik's first generation of Badniks. They are deadly aerial marksmen and bombard targets with laser fire from their stinger guns. These are based directly off of the Buzz Bombers from Sonic the Hedgehog on the Sega Mega Drive and have made numerous appearances throughout Sonic the Comic. Buzz Bombers were succeeded by Buzzer Badniks, although Buzz Bombers still made occasional appearances. 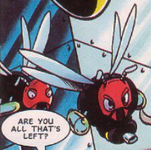 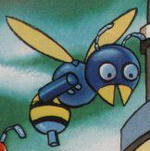 Art by Richard Elson
Add a photo to this gallery

Retrieved from "https://stc.fandom.com/wiki/Buzz_Bomber?oldid=20149"
Community content is available under CC-BY-SA unless otherwise noted.